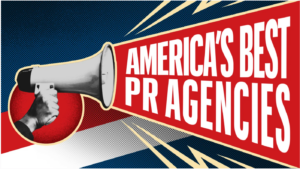 October has been an exciting month for MMGY NJF, with the agency receiving several major honors recognizing excellence in the field of public relations. Congratulations are in order to the entire agency for being included on Forbes’ inaugural list of America’s Best PR Agencies. MMGY NJF received a five-star ranking (the highest ranking possible) and was in the company of the largest PR firms in the world.

The agency is also celebrating a PR News Platinum Award in the Travel/Tourism/Hospitality category for its campaign on behalf of Oceania Cruises. The team accomplished an incredible feat, sending 21 top-tier media on voyages within the span of 120 days. This produced editorial coverage for nearly a year, with 30 features placed all target outlets, including Travel + Leisure, Food + Wine and Condé Nast Traveler.

Last, but not least, The National World War II Museum team was a PRSA Silver Anvil Award Finalist for its campaign commemorating the 75th anniversary of D-Day. While the campaign did not take home the Silver Anvil, this is the first time the agency has been up for this illustrious award. Earlier this year, this campaign won Best of Show in PR at the 2019 HSMAI Adrian Awards. The results speak for themselves with a front page story on the cover of The New York Times and extensive segments on TODAY, NBC News, CBS This Morning, CNN and much more.